US elections change the fate of the world. Every four years, the world holds its collective breath and waits to see what their future holds. Although the elections may technically only be about the United States, everyone knows that whatever happens, they will feel the consequences.

Over the last four years, Iranians have suffered immensely as a result of Donald Trump’s presidency. After years of negotiations between the US and Iran that led to a historic agreement and the prospect of peace between the two nations, after coming to power, Trump immediately ripped the deal up. He imposed sanctions on Iran with the goal of exerting “maximum pressure” on the economy, with catastrophic results for ordinary Iranians, who saw their economy tank, their money lose 90% of its value, prices of ordinary goods rise three or four times over, and their fight against COVID crippled; not to mention that many basic commodities and health needs, like insulin, are now unavailable in Iran due to US pressure.

It’s no wonder then, that Iranians were watching the US elections extra closely. Knowing that their fates are held hostage by the whims of a few thousand voters in a couple counties of Pennsylvania, it’s not hard to understand why Iranians spent the days before and after the elections obsessed with US electoral politics.

The world of Iranian social media memes was kicked into overdrive by the elections, as millions across Iran tried to keep up with the absurd twists and turns of the process and found that, as usual, the best way to do so is with laughter.

The following is a round up of some of the best Iranian memes poking fun at Donald Trump and the US electoral process – as well as at Iranians themselves for following along so closely!

Our first video is by Dasandaz band, which makes satirical music videos. In this video, the band calls to American voters with a message about how important their votes are, saying: “Know that who you vote for changes our lives”:

As polls showed an increasingly dire road to re-election ahead for Donald Trump, many Iranian memes jokingly compared him to a politician who’d realized the game was up – and was now desperately trying any angle to succeed. 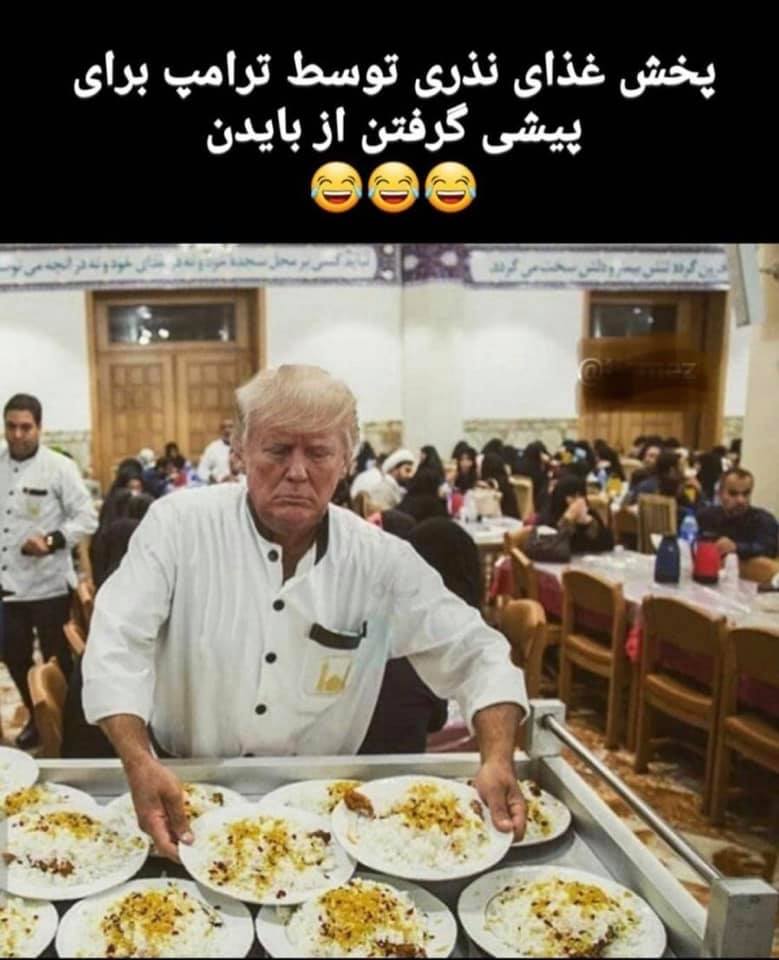 These first two memes show Donald Trump and his wife Melania preparing “nazri,” food that is given out freely to others as an act of good will and service in honor of an Islamic saint, done in the hope of getting a wish fulfilled from God.

The joke is that they’re putting in their last efforts to snag a win by appealing to God – or the appearance of humility – at the last moment. Melania can be seen sprinkling cinnamon on sholeh zard saffron custard, a common nazri food prepared by women, while Trump is serving barberry rice. 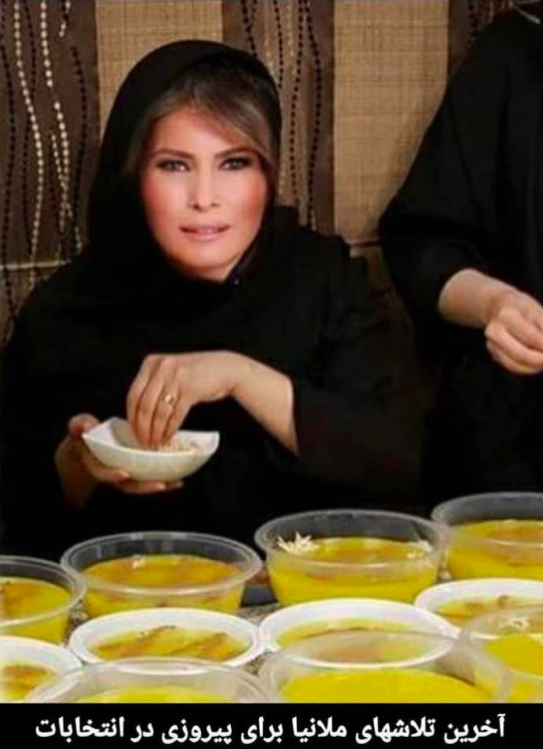 The humor of these jokes is in part derived by comparing Trump and Melania to Iranian politicians; what makes them funny is imagining the Trumps engaged in the same kind of public-facing piety in the home of currying divine (and popular) favor.

On a similar theme, this meme “celebrating” a potential Trump victory (but actually mocking it) does so by putting them on top of a Zamyad, a class Iranian truck, waving to the crowd, in the style of a rural Iranian political victory parade: 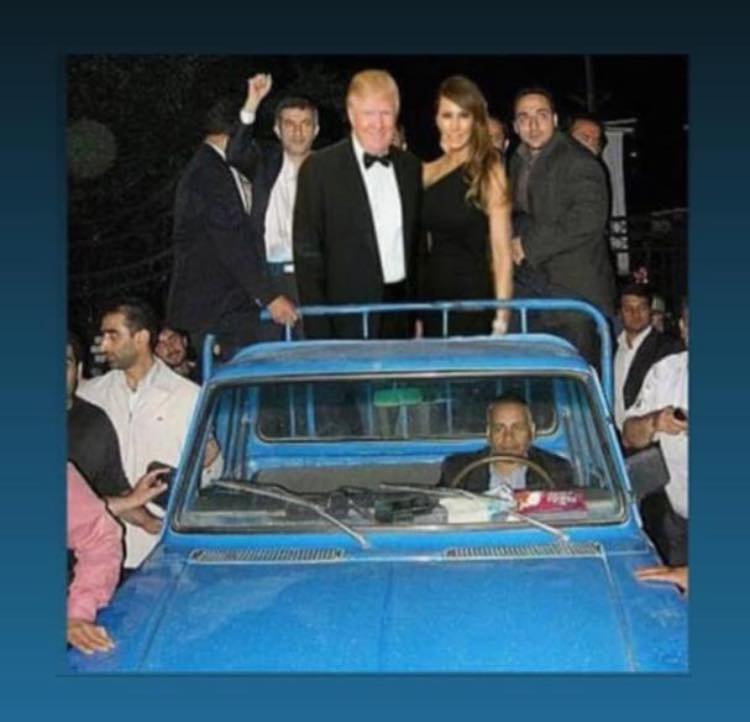 That’s also the theme for this meme, which shows Trump passing out fruit juice on the street in Tehran, dressed like an Iranian politician, trying to raise support for his bid among passerby: 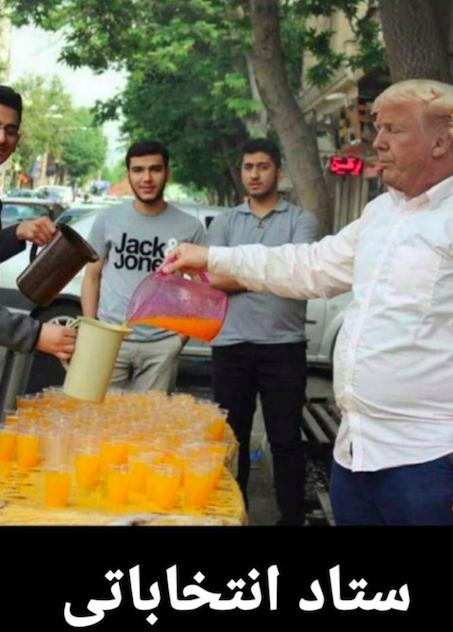 This meme, meanwhile, comes from Iraq but works well in the Iranian context as well. It shows Trump in Karbala, the southern Iraqi city home to the shrine of Imam Hussein, and the joke is that he’s been seen in the last days before the election praying at the shrine, hoping to clasp victory. 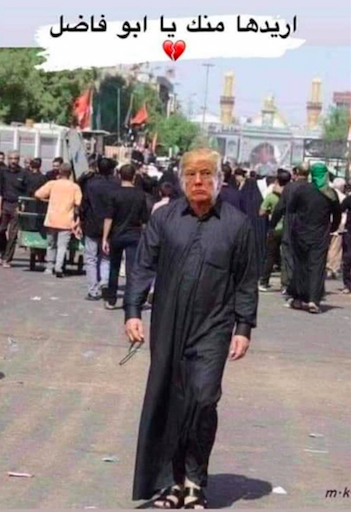 Another genre of meme that emerged were videos in which the US elections were shown but dubbed with the Persian-language discourse of Iranian elections. On Iranian state TV, presidential elections are regularly shown as a triumph for the Iranian people in the face of imperialist designs to undermine their country.

This leads to some hilarious quips in this fake “news report,” where a man answers the question of why he came to vote by saying, “We need to stand on our own feet!” and a woman interviewed says her vote is a punch in the face to imperialist powers. The video underlines Iranians’ surprise at the sense of historic uncertainty around the US elections.

For many Iranians, the delay in announcing results of the US elections were unexpected and unprecedented.

There is a wide-ranging assumption that whatever its flaws, things “work” in the US; watching the electoral system barely scraping through over the course of several days came as a surprise to many, becoming the main topic of conversation in taxis across the country. This meme reads, “Topic of conversation right now in taxis”: 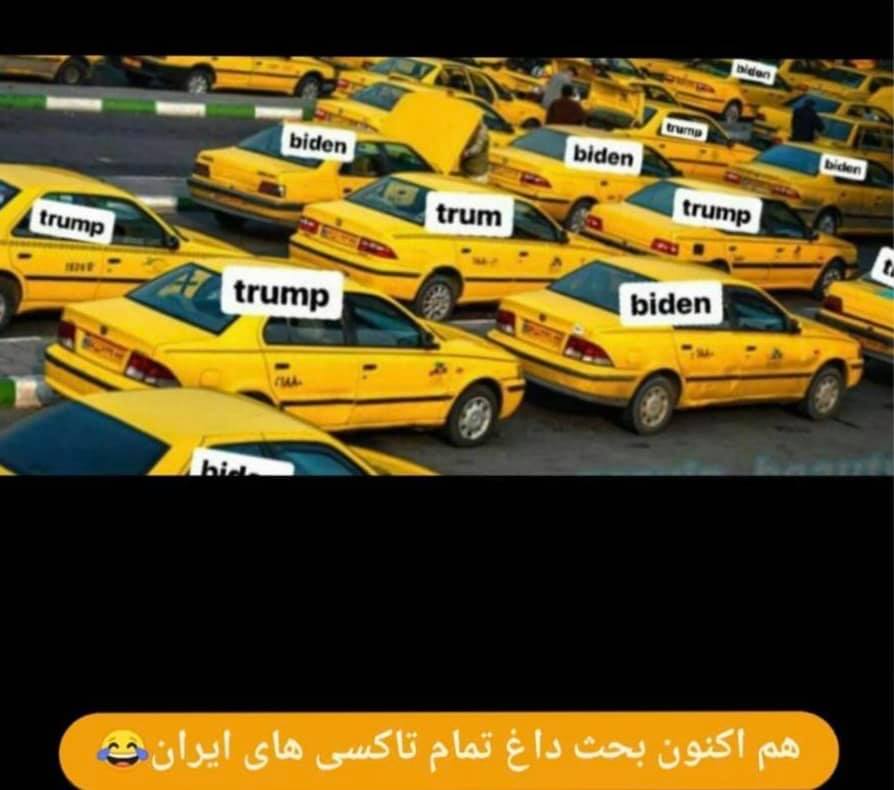 Other memes took this joke further. This meme uses a screenshot from Oscar-winning Iranian film A Separation to say: “I swear on this Quran that Iranians before today, if you’d said the word Wisconsin to him, he’d think you were talking about a brand of beer, and now he’s now busy pontificating day in and day out on Wisconsin’s electoral politics and popular vote” 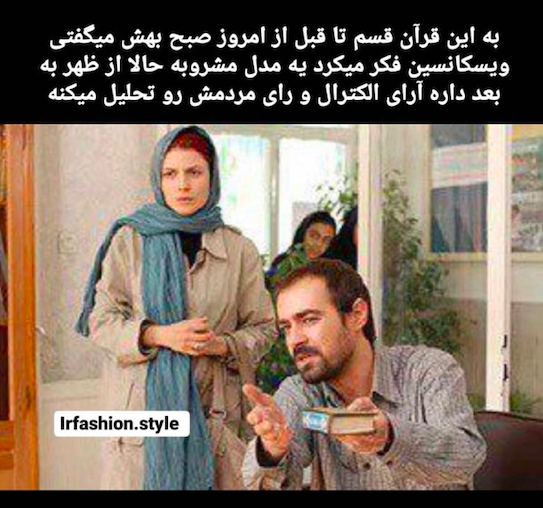 The entire week, Iranians were so consumed by American politics that you could’ve been forgiven for thinking Tehran was somewhere in the States. That’s the theme of this cartoon, which shows a Tehran taxi where all the debates are around the path to electoral victory – and a pedestrian is asking for a ride as well, saying “Kentucky, straight!” 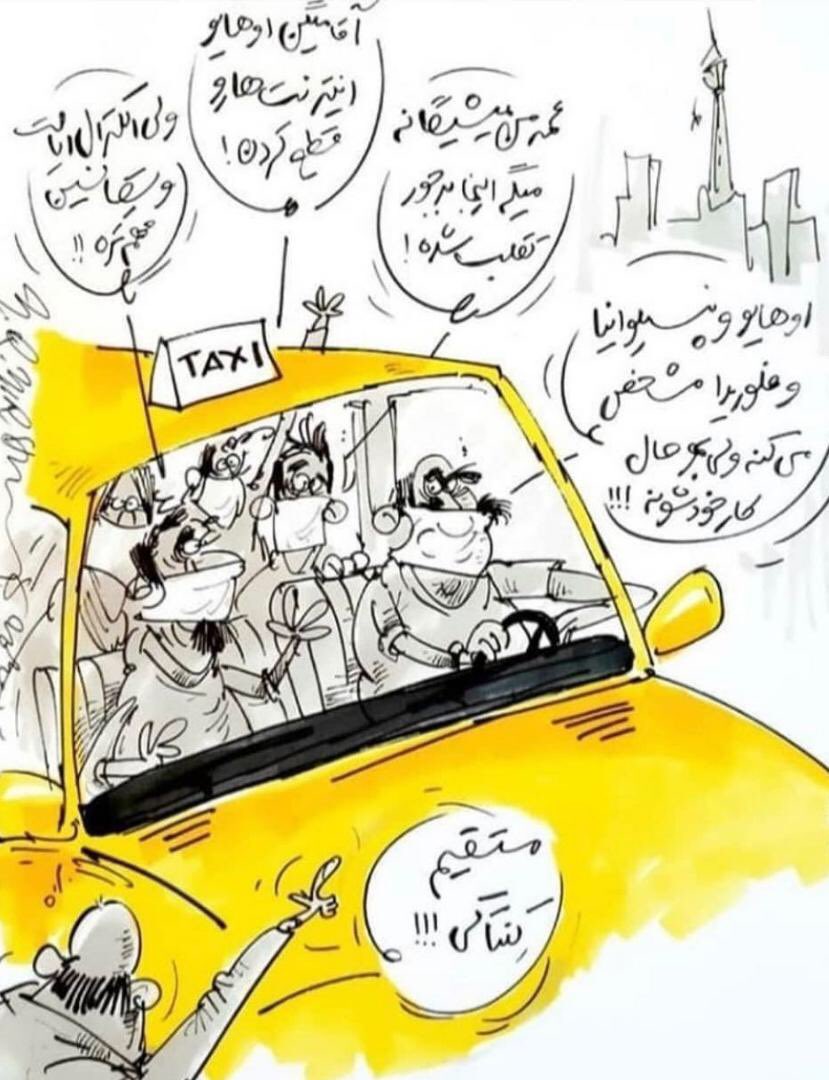 Another meme pokes fun at the same theme, joking that due to insecurity in the US, schools in a number of states are being closed for a few days, including in Dimavand and Fires-Kuh – two Iranian regions, re-spelled with American accents: 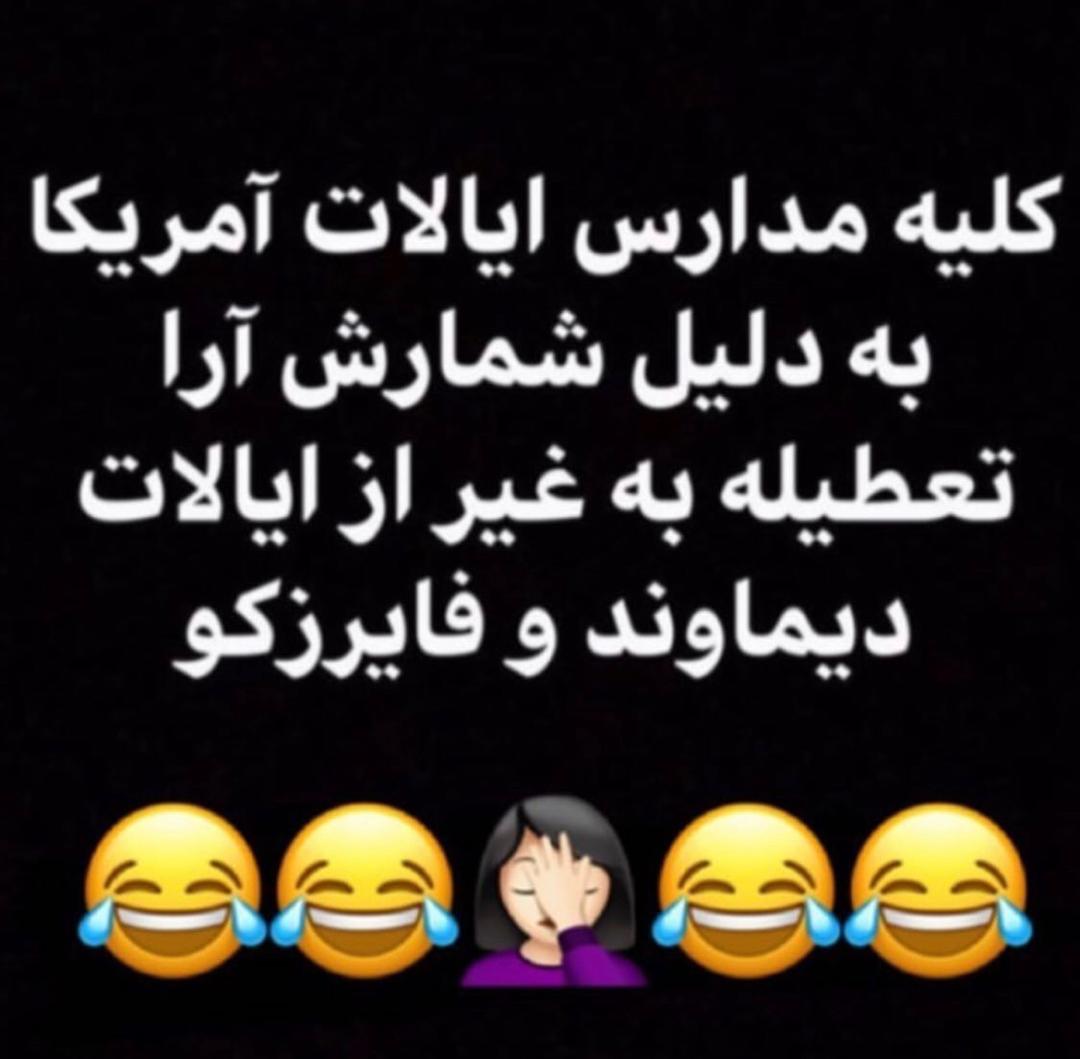 This led in turn to jokes about how well Iranians had learned US geography – while still failing at identifying some of their own cities and provinces! This meme reads: “You’re learning all the US states these days, but until just yesterday you were getting Bojnurd and Birjand mixed up. Now you’re pontificating all about Nevada and Pennsylvania?” 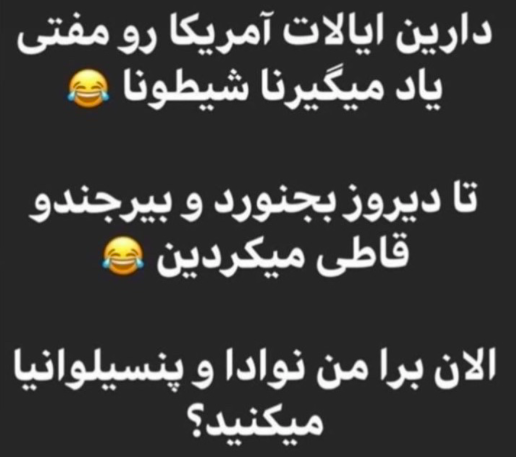 The delays in Nevada’s vote-counting provided ample fodder for Iranian memes, like this one comparing the count to Persian classical music:

Funniest Iranian meme on the elections so far: “Hurry up Nevada” pic.twitter.com/xibmBTRaBc

The fact that the US elections is all that Iranians could talk about led to some reflection as well: what if the shoes were reversed?

The hilarity of imagining Americans being as preoccupied with Iranian elections as Iranians are with US elections reveals the deep power imbalance in our current world- the fact that few Americans could name Iranian leaders, much less follow Iranian elections closely and be concerned that the outcome could affect them.

This power imbalance is the source of this meme: “In the hope that one day all of the American people will be as stressed out trying to figure out if Mir Salim became president of Mohsen Rezai”:

These jokes also brought up comparisons to Iran’s own checkered history with elections, especially the 2009 elections that brought Mahmoud Ahmedinejad to power for a second time.

Before the results were called in 2009, challenger Mir Hossein Mousavi declared victory based on what he felt were overwhelmingly positive returns. However, the results released were dramatically in Ahmedinejad’s favor – and led to widespread suspicions that the totals were largely fraudulent. That’s the inspiration for this meme: 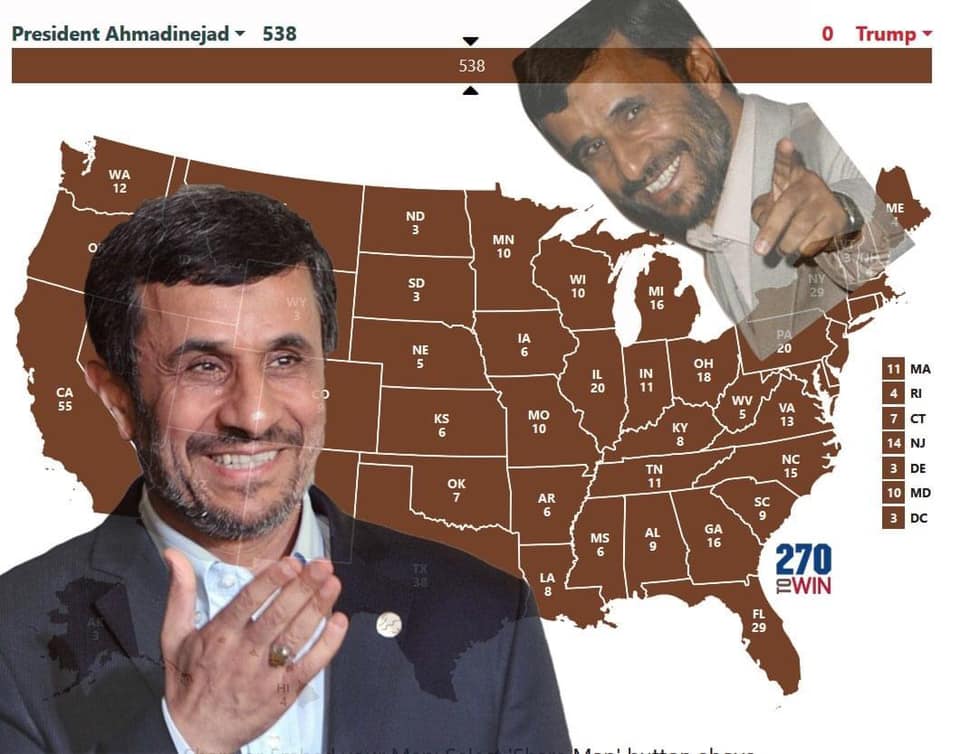 Jokes about the potential for fraud in the election were not limited to Iran, but became a big part of Arab world memes as well, such as these two from Syria and Algeria: 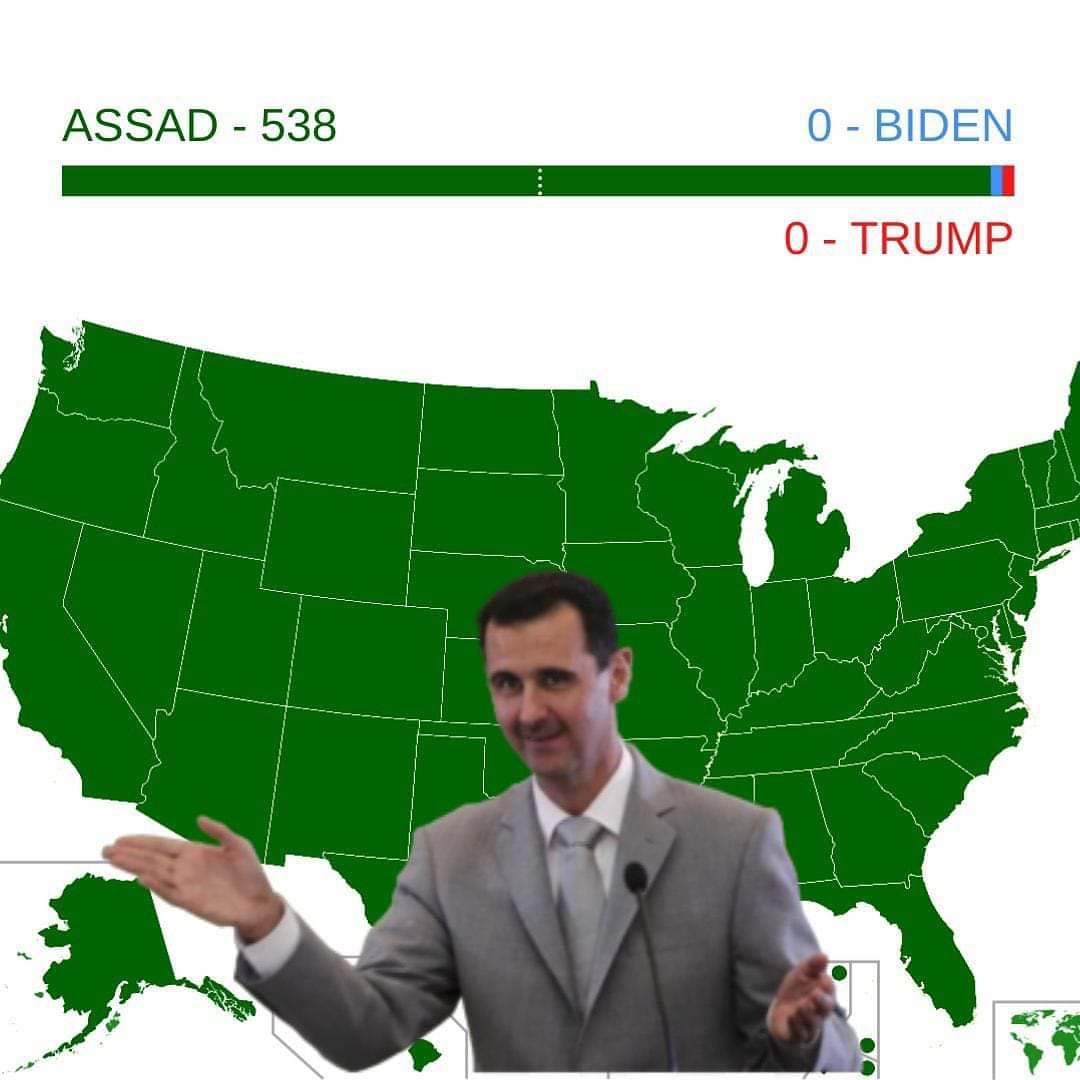 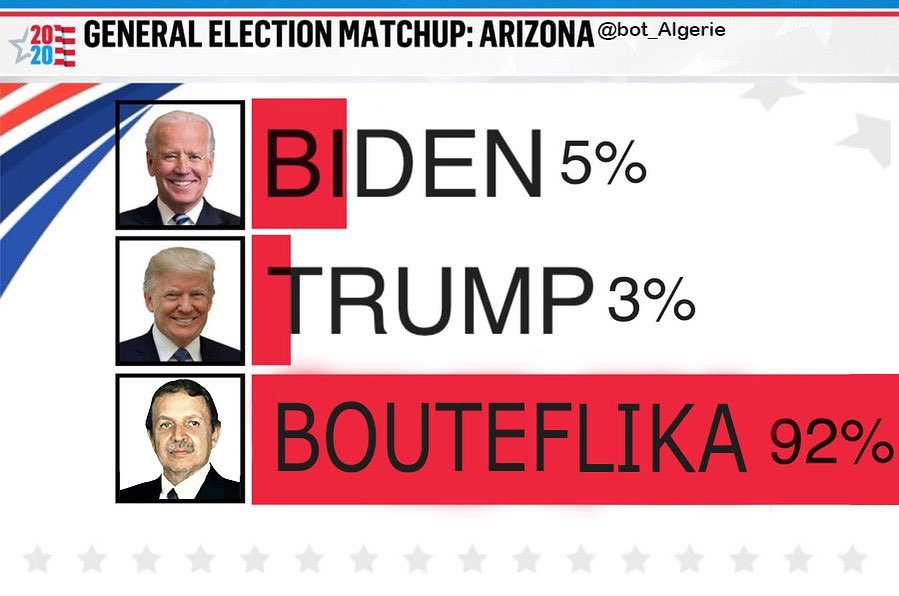 On Friday, as the results from the final few states started to become clear and Biden’s win became more certain, memes started moving into celebration territory.

This meme shows Iranian President Rouhani at home watching the elections and clapping as Biden pushes ahead – a photoshop of a famous image from the 2016 World Cup which pictured, somewhat unprecedentedly, Rouhani at home wearing the national soccer jersey and none of his usual religious garb. 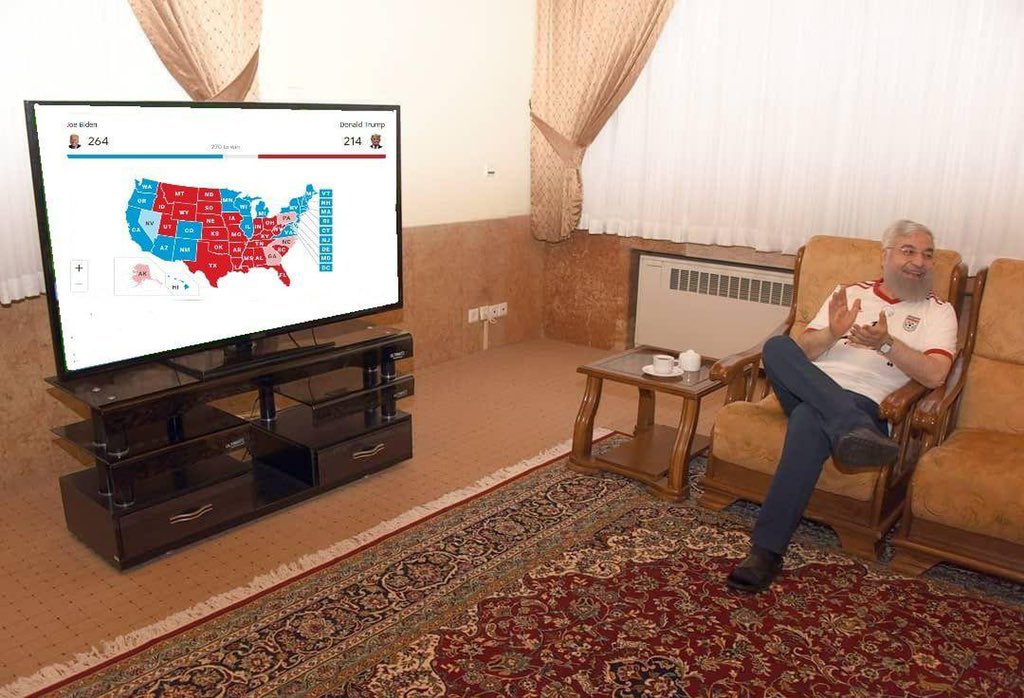 Indeed, as it became clear over the course of the week that Trump was doomed to failure, new memes were created that mashed up revolutionary anthems from the 1979 Revolution with images of the elections.

These often included the Black Lives Matters protests that preceded them, with George Floyd illustrated as a martyr of the people in the fight for justice. This dancey patriotic video illustrates this trend:

This meme, meanwhile shows Trump and his supporters crying over their loss, starting out with him bemoaning: “We’re not as worthless/deplorable as they say!” as the crowd breaks into tears:

Our final meme is a photoshop re-work of a classic photo showing a newspaper headline from the day the Shah of Iran fled the country in 1979. After months of protests, Iranians were overjoyed at the victory of their popular revolution to overthrow the Shah and his regime.

Headlines rung out in joy in the days that followed, as a sense of euphoria enveloped the country. The most famous headline was “Shah Raft” – “The Shah’s gone.” 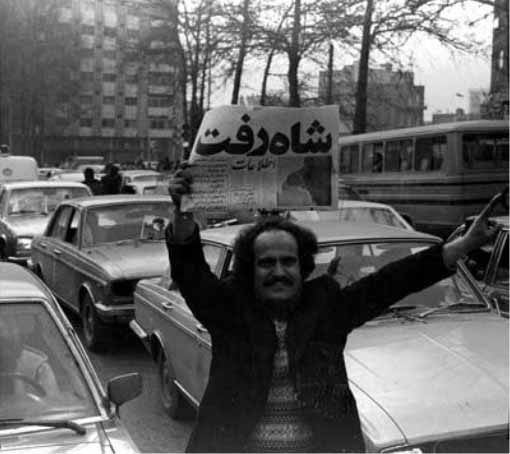 This image was in turn reworked into something hopeful for a new age: “Trump’s gone!” 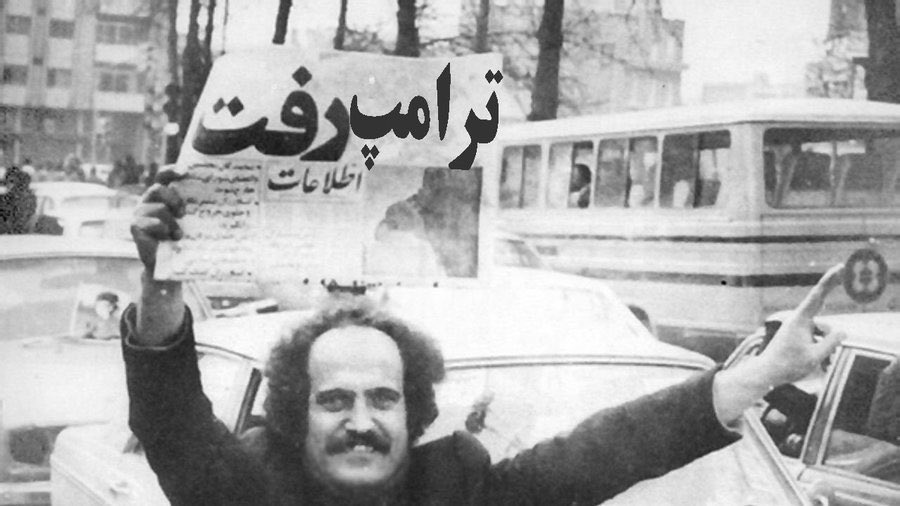 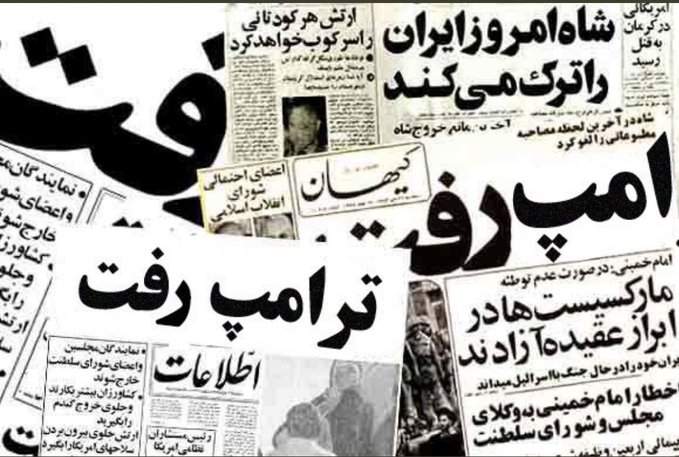 @AjamMC
"Pul-e-Surkh centre was once the hub of cultural activity in Kabul, with cafes filling the buzzing bylanes and peop… https://t.co/YGRuUpqHdF
4 minutes ago
RT @AlgeriaNumidian: Algerians celebrating the independence of Algeria ❤️🇩🇿 https://t.co/vX0aa345CK
4 hours ago
RT @sumacweave: A rug gifted to the Communist Party of the Soviet Union by the Democratic Party of Azerbaijan. https://t.co/jH489uiQNh
5 hours ago
RT @karpassia: ‘Muqam’ (1984) by Uyghur painter Ghazi Ehmet https://t.co/MLce2nhgTo
5 hours ago
The original sketch of the Iran Post logo drawn for a national competition by Mostafa Kiani in 1989. "Even when o… https://t.co/V4bivTHJw4
5 hours ago
The story of how an Iranian product became a luxury good connoting Western and white high-class status speaks to ho… https://t.co/v7HVFwHRrT
5 hours ago
"Since the Trump administration designated Iran’s Islamic Revolutionary Guard Corps a terrorist organization in 201… https://t.co/PEKpYkNU4W
5 hours ago
"Many musicians left after the revolution and during the war, mostly for Europe and North America, joining a diaspo… https://t.co/GS8uqm6tia
3 days ago
Follow