In this episode, Lindsey and Ali interview Dr. Jyoti Gulati Balachandran, Assistant Professor of History at Penn State, about her book Narrative Pasts: The Making of a Muslim Community in Gujarat, c. 1400-1650 (Oxford University Press, July 2020)

The Gujarat region of western India has a long role as a maritime and commercial center in the Indian Ocean, but the rich history of its Muslim community – and the important role of Sufis in developing Gujarat’s identity as a distinct region – has been overlooked. Dr. Balachandran argues that Arabic and Persian literary production among learned Muslim men was crucial to the development of Gujarat as a coherent region between the 15th and 17th centuries, plugging it in to developments across South Asia and beyond. Sufis were particularly important in this endeavor, and she urges us to seriously consider why and how different genres such as taẓkira or manāqib were chosen by these writers instead of dismissing them all under the imposed category of hagiography.

Balachandran shows how textual histories and the tomb complexes of Sufi scholars contribute another source for history beyond that of the court, serving as two poles that reinforced one another’s place in time as well as a specific region. Sufis allowed Sultans to ensure that the Muslim community expanded and prospered, and just as the Sultans militarily defined their kingdoms, Sufis sketched out realms of spiritual rule through these institutions and narratives about the past.

One important example that Dr. Balachandran touches on is the figure of Shaykh Ahmad Khattu, a 15th century Sufi who became the Shaykh of Ahmad Shah I of the Muzaffarids of Gujarat. While there is little contemporary writing about him, the complex that is built for him after his death by the Muzaffarids as well as the histories written by Suhrawardi Sufis in the centuries after his death make him an important pivot in the history of Islam and Gujarat. 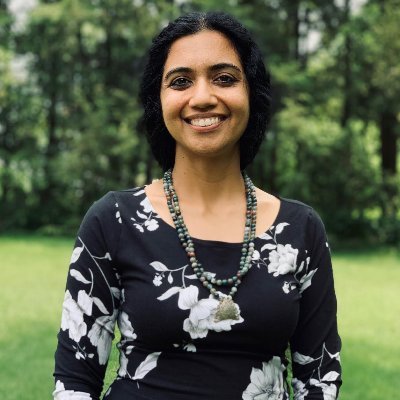 Jyoti Gulati Balachandran is Assistant Professor of History at Pennsylvania State University. A historian of medieval and early modern (c. 1200-1800) South Asia, she is interested in social and cultural histories of Muslim communities in Gujarat and the wider Indian Ocean world. Her research has appeared in the Indian Economic and Social History Review and Études Asiatiques, and she has contributed several articles to the third edition of the Encyclopaedia of Islam. She is currently working on a history of Muslim scholarly networks in the sixteenth-century western Indian Ocean using a variety of Arabic narrative texts produced in Gujarat and the Hejaz.

Lindsey Stephenson (Ph.D., Near Eastern Studies, Princeton University) is the creator and host of Ajam’s Indian Ocean Series. She is a social and legal historian of the Middle East and Indian Ocean. Her work focuses on sovereignty, mobility, and identity in the Persian Gulf.

@AjamMC
RT @BaytAlFann: Ebru is the ancient Turkish art of marbling - creating colourful patterns by sprinkling & brushing pigments on water, which…
46 minutes ago
RT @Gharamophone: Today we revisit a post from almost exactly 3 years ago: a stunning Andalusian recording made by the Algerian Jewish arti…
48 minutes ago
"It may sound like timeless wisdom, but Afghanistan’s epithet “the graveyard of empires” appears to have been coine… https://t.co/jnDbxwnChP
48 minutes ago
"As with every age of discovery, those in possession of power will attempt to control the narratives of that which… https://t.co/Jy7j9euq6b
3 days ago
"Known as Radio Yerevan beyond Armenia’s borders, the station helped connect thousands of Kurds to their culture in… https://t.co/J9kOXKYVci
4 days ago
"Three Centuries of Travel Writing by Muslim Women is a collection of writings of Muslim women, who travelled far f… https://t.co/ZNYedmTM9R
6 days ago
"Lebanese authorities have been “trying to repeat the same policies of amnesia that followed the civil war with the… https://t.co/RW9LgZg3z3
7 days ago
RT @alexshams_: The beautiful arts of Ashura in Iran: https://t.co/h1LIQjrNbv
7 days ago
Follow