Iranian television has reached Latin America, and after years of waiting to be able to travel between Caracas and Buenos Aires and still have access to our favorite Iranian soaps, the dream has become reality. Following the launch of the Iranian government’s first Spanish-language news website, HispanTV, a few months ago, a 24-hour satellite channel in Spanish began broadcasting yesterday under the same name. HispanTV is the first satellite channel in Spanish emanating from the Middle East, and will feature a mixture of news as well as Iranian movies and soap operas. While I’m not expecting any of this to challenge the supremacy of Latin American telenovelas across the region (not to mention the globe), HispanTV is an interesting next step for the Islamic Republic that solidifies its Third Worldist credentials at a time when the situation in the Middle East is getting a bit choppy. While Iran’s popularity in the Middle East has gone up and down over the years depending on local factors (like Hezbollah’s defeat of Israel in 2006 or the current Syrian uprising), in the larger Global South Iran has managed to retain a certain appeal because of its unyielding anti-American posturing.

This is true not only in majority Muslim countries like Indonesia, Senegal, or Pakistan, but also in areas like Russia or the Ukraine (where nearly 40% have a positive opinion of Iran) as well as places like Mexico or Venezuela, where a quarter and third have positive opinions of Iran, respectively. Additionally, Iran has a long history of engaging in public diplomacy around the world, and HispanTV adds Spanish to the long list of languages Iranian television and radio currently broadcasts (which currently ranges between diverse tongues such as Bosnian, Hebrew, Indonesian and Uzbek, among others). Finally, the launch of the channel comes after a recent tour by President Ahmadinejad to Ecuador, Nicaragua, Cuba, and Venezuela, a tour which helped dispel the myth that Iran is completely isolated. 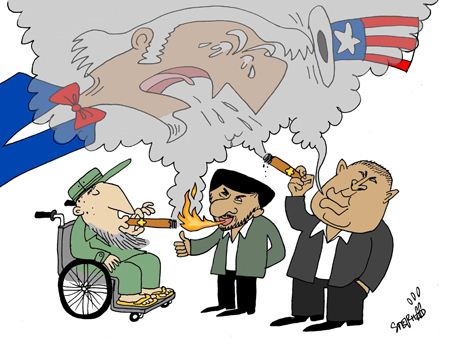 HispanTV’s website is a bit bland (and shares PressTV’s aesthetically unappealing layout), though it’s slightly more tropical color scheme brightens the picture up a bit. Towards the bottom you can check out clips from the broadcast, and a live broadcast feed is also available.

It’s hard to predict how the channel will fare. While Iranian global politics are broadly in line with those of many leftist Latin American regimes (a fact perhaps related to the historical influence of liberation theologies– Catholic and Shi’a- in both regions), this will be the region’s first exposure to Middle Eastern or Iranian culture on a mass consumer scale. And while it might appeal as a curiosity- especially for the millions of Arab-Latin Americans scattered across the region- it remains to be seen whether this dose of Iranian culture will find mainstream appeal.

Some tend to forget that contemporary Latin American culture was heavily influenced early on by the Andalusian culture brought over by waves of Iberian immigrants. In fact, the first language spoken in the New World was Arabic- because Christopher Columbus thought he had arrived in China, he expected the natives to understand the global language of trade at the time and thus sent an Arab Jew forth to communicate with those he encountered on Cuba. Although the attempt floundered, the episode is a reminder of how deeply embedded Arabic culture was in Iberian culture at the time.

Perhaps this story is a quaint reminder of a different era. However, my experiences across Latin America have suggested to me that the cultural and religious affinities between these two regions run relatively deep, even if it is not always so obvious to the casual observer. It is exciting to imagine the kinds of hybridities or cultural and social connections that could emerge between our geographically distant but historically-related regions.

Central Asian Pop Music and the Eternal Question: "You’re not going to get married?!”