Thanks to our amazing supporters of our recent crowdfund, Ajam will now be producing and releasing regular podcasts. To download the episode, subscribe to us in the iTunes store,  Spotify Podcasts, and Google Play.

Dr. Sevea and Dr. Kaul open the episode with a discussion about the political history of Kashmir’s division and occupation, as well as how India’s BJP-majority government has recently revoked Jammu and Kashmir’s special status, dramatically affecting the everyday lives of people in the region. They then explore the role of Kashmiri poetry as a medium for understanding the decades-long occupation, as well as the resistance to it. Finally, the episode closes with a reading of “A Pastoral,” a poem written by the late Srinagar-born poet Agha Shahid ‘Ali (1949-2001) in dedication to Dr. Kaul. 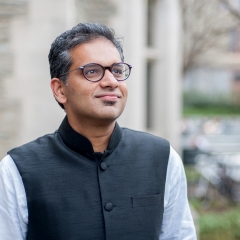 Teren Sevea is a historian of religion in South and Southeast Asia at the Department of South Asia Studies, at the University of Pennsylvania. He is the author of a forthcoming book entitled Miracles and Material Life: Rice, Ore, Traps and Guns in Islamic Malaya. He has also co-edited a volume entitled Islamic Connections: Muslim Societies in South and Southeast Asia, and is the author of number of book chapters and journal articles pertaining to Indian Ocean networks, Sufi textual traditions, Islamic sex manuals and the socioeconomic significance of spirits.

Haunted Ramadan: Ghosts, Devils, and the Soul of Iranian Television

How George Became Kevork: Race, Law, and the Many Transformations of the Michaelian Family

@AjamMC
RT @IslamicAtDuke: The Arts of Protection and Healing in Islam: br Amulets and the Body https://t.co/q2EOlDVdAF via @ajammc
13 hours ago
RT @IslamicAtDuke: The Arts of Protection brand Healing in Islam: br Water Infused with Blessing https://t.co/4RTNWRb3lM via @ajammc
13 hours ago
RT @SapeloSquare: "I consider Ramadan to be a radical shock to our nafs — a monthly bootcamp to remind us of why we are really here." @kell…
yesterday
RT @BlackIranians: تونی موریسون (نام تولد: کلوئی اردِلیا وافورد) نویسنده سیاه آمریکایی، ویراستار، استاد دانشگاه و برنده جایزه پولیتزر در ش…
yesterday
RT @kenan_sharpe: Sezen Aksu makes a statement in solidarity with the villagers resisting a mining project in Rize's beautiful İkizdere dis…
yesterday
RT @akarjooravary: Part 1 for those of you who missed it: https://t.co/J3Pek2JJ5l
yesterday
RT @akarjooravary: Water filled with baraka and healing 🌊💧✨Part 2 of Professor Gruber’s article on the healing and protective arts of Islam…
yesterday
Follow